Deprecated: strripos(): Non-string needles will be interpreted as strings in the future. Use an explicit chr() call to preserve the current behavior in /var/www/inspirationdaily/wp-content/plugins/advanced-page-visit-counter/public/class-advanced-page-visit-counter-public.php on line 160
 Chicago Rapper Juice wrld Gone Too Soon - Inspiration Daily 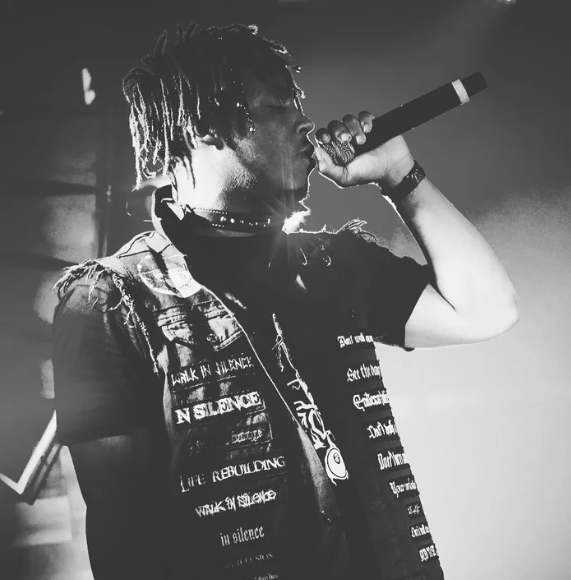 Chicago Rapper Juice wrld is Gone Too Soon. Jarad Anthony Higgins was an American rapper, singer, and songwriter from Chicago. Higgin’s stage name “Juice wrld” was reportedly inspired by Tupac Shakur’s performance in the 1992 film, “Juice.” Juice wrld was best known for his hit singles “Lucid Dreams” and “All Girls Are the Same.” These singles helped him gain a recording contract with “Lil Bibby’s Grade A Productions” and “Interscope Records.”

The young Chicago rapper suffered a seizure on Sunday December 8th 2019 at Chicago’s Midway International airport and was rushed to the hospital. The cause of the seizure is unknown and he was pronounced dead at the age of 21.

Raised to be a conservative nerd

Higgins was born on December 2nd 1998 in Chicago Illinois. His parents divorced when Higgins was 3 and raised him and his older brother as a single mother. Higgin’s mother was very religious and conservative and did not allow him to listen to Hip-hop. However, he was allowed to listen to Rock and Pop music he discovered on video games like Guitar Hero and Tony Hawk’s Pro Skater. These games introduced him to artists such as: Panic! At the Disco, Blink-182, Black Sabbath, and Fall Out Boy. He first learned piano at the age of 4 followed by the guitar and drums. He also played trumpet in band. He started posting songs he recorded on his phone to Soundcloud during his Sophomore year in high school.

Higgin’s started to develop his image as an artist during his Freshman year in high school. He released his first track, “Forever” on Soundcloud in 2015 under the name JuicetheKidd. A majority of his early tracks were recorded on a cellphone. At this point, he changed his name JuicetheKidd which was affectionately inspired by rapper Tupac Shakur. He chose “Juice wrld” because he believed that it represented “Taking over the world.”

In 2017, Juice wrld began attracting the attention of the artists Waka Flocka Flame and Southside as well as G Herbo and Lil bibby. He signed with Grade A Productions.

In May of 2018, “Lucid Dreams” was officially released with a video. It peaked at number two on the US Billboard Hot 100 and became one of the biggest streaming songs of 2018. His first studio album “Goodbye and Good Riddance” was released on May 23rd, 2018. He released a two-song EP in June of 2018. “Too Soon” was dedicated to the deceased wrappers “Lil Peep” and “XXXtentacion.”

Thanks to a Google Drive hack, many of Juice’s unreleased songs had been extensively circulating. The songs began to leak in August of 2018. Right now there are more than 100 leaked songs, and even more in circulation.

Higgin’s first official single as Juice wrld titled “Wasted” was released on July 10th, 2018. He made an appearance on Jimmy Kimmel Live! on August 8th, 2018 where he performed “Lucid Dreams.” Higgins also collaborated with Future and was in “Fine China” and “Wrld on Drugs.” He also contributed to the soundtrack for “Spider-Man: Into the Spiderverse.”

Higgins stated that his musical style is inspired by a wide genre from rock music to rap music. Some of his biggest musical inspirations were: Chief Keef, Kanye West, Travis Scott, and Billy Idol. His other influences were: 2Pac, Fall Out Boy, Wu-Tang Clan, Escape the Fate, Kid Cudi, Megadeath, and Black Sabbath. Higgin’s music has been branded as “emo” and “rock.”

Higgins had a history of drug abuse and openly shared his story and experiences. In 2019, he was living LA with his girlfriend Alexia who he met around the time that his career was launching.

On Sunday morning, December 8th ,2019, Higgins was pronounced dead after suffering a seizure at the Midway International Airport in Chicago. The Chicago police department stated that Higgins was conscious and bleeding from the mouth when paramedics arrived on the scene. From there he was rushed to the hospital where he was pronounced dead at 3:14 am.

At the age of 21, the young rapper is gone too soon, but he has left behind a legacy.

8 Hula Hoop Workouts That Will Transform Your Life

4 Easy Ways to Search for a Tinder Profile

How Do I Find a Specific Person On A Dating App?

Start A Love Affair With Your Body

Is Tinder a place for creeps?

Find Out If Someone Is Using Online Dating Apps

If you bang real corpses this won’t happen.

When your Mama goes for a quick “workout at the gym”, and Papa’s sleeping.

Signs of an Abusive Relationship

envoy - November 26, 2019
0
If you are worried that you might be in an emotionally abusive relationship then please read the following article about recognizing signs...

Can I Find a Certain Name on Tinder?

Find Out If Someone Is Using Online Dating Apps